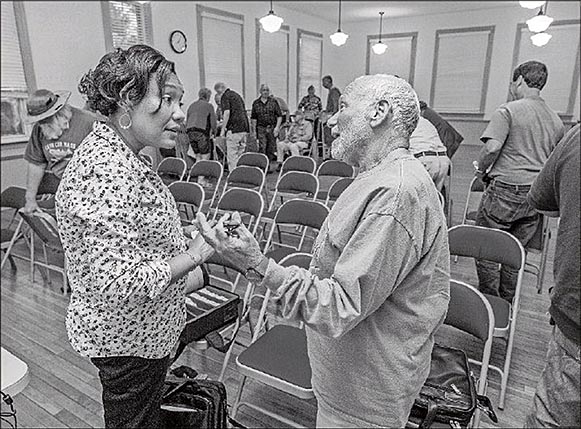 BARS meeting hears about the effects of climate disruption

Tonna-Marie Rogers, coastal training program coordinator at the Waquoit Bay National Estuarine Research Reserve, recently presented a talk on the many disruptions caused by climate change at the monthly meeting of the Barnstable Association for Recreational Shellfishing. She not only discussed how climate change is affecting Cape Cod and the New England region as a whole, but also how these changes in the environment will impact Cape communities in the future.

Rogers, who spoke Tuesday evening at the West Barnstable Community Building, began the meeting by asking the roughly 40 attendees a series of “yes and no” questions, including “Do you think climate change is happening?,” and 86 percent of the audience agreed that it was.

The answers, which were tallied by hand-held digital devices provided by Rogers, set the tone for the meeting, confirming that BARS members, in particular, are interested in learning how science and the management of natural resources can help curb environmental disasters due to climate disruption.

Rogers’ presentation was based on statistics pulled from the National Climate Change Assessment, a summary that describes how climate change will affect the water supply, oceans, agriculture and ecosystems around the world. Rogers, who gave specific statistics on rising temperatures in the atmosphere as well as the ocean, ice sheets and snow cover, said that scientific research along with data pulled from satellites and buoy systems indicates that the globe is in fact expe riencing a concentration of carbon dioxide, as well as methane and other gases, which is causing temperatures to rise.

“If you look at the overall trends, the last three years have been the warmest on record, and every single region of the United States is seeing an increase (in temperatures),” Rogers said. “If we don’t do anything we could see a 15-degree rise in temperature in the future which will create a one-to-four-foot rise in sea levels, and extreme weather events which will stress infrastructure across the nation.”

Rogers also covered how climate change will impact the environment on a local level and explained that because temperatures have gone up two degrees since 1895, the northeast region of the United States has already seen a 71 percent increase in extreme precipitation since 1958, which is creating flooding and damaging infrastructure throughout New England, creating a financial strain on the overall economy.

“Sea levels have always been rising, but it’s accelerated now,” Rogers said. “In New England, we are expected to outpace the global range of sea level rise, and depending on sea ice melt, we could see an even more abrupt change.”

On Cape Cod specifically, Rogers pointed out that rising sea levels aren’t only accelerating the rate of erosion, but also contributing to the ocean’s absorption of carbon dioxide from the atmosphere, resulting in ocean acidification. The lowering of the pH (potential Hydrogen) is problematic for the shellfish industry in particular, because the acid in the water makes it harder for shellproducing animals to create their husks.

“Shellfish are some of the most vulnerable fish stocks, and these intense rainfall eve nts could impact shellfish
harvests in an extreme way,” Rogers said. “The acid is contaminating local waters, especially in low-lying areas, which will in turn affect shellfish populations.” 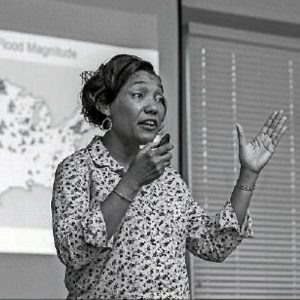 Rogers, whose expertise lies in environmental sciences and biological oceanography, said there is action that scientists, community members and town officials can take to help manage the impacts of climate change. Because the Waquoit Bay National Estuarine Research Reserve has been monitoring the effects of climate change since the 1980s, Rogers explained, scientists and climate change specialists are ready to move forward with a variety of projects that can help slow its disruptive effects. One program, in particular, which Rogers referred to as “groundbreaking research,” is the research reserve’s focus on seagrass and salt marshes, and their ability to absorb and store carbon from the atmosphere.

“For a long time we didn’t recognize that salt marshes are playing a huge role in soaking up carbon, drawing it out of the atmosphere and storing it in the sediment,” Rogers said. “We call the repository of carbon a blue carbon ecosystem, and it’s a huge benefit. We are working with top notch scientists to invest in wetland restoration, which can sequester more effectively and more permanently than terrestrial forests.”

Steve Hoxie, a member of BARS, felt that Rogers’ presentation was both interesting and informative, and gave him hope for the future.

“We know (climate change) is happening and while it isn’t going to happen overnight, we have to look at the future and do something now,” Hoxie said.

For Ron Glantz, also a member of BARS, the presentation was important, not only to raise awareness, but also offer solutions on how people can help. He said he is concerned for his grandchildren and great-grandchildren’s future.

“The Cape is a special place and we stand to lose a lot,” Glantz said. “I fear that my grandchildren won’t be able to swim in our ponds or enjoy our beaches and oceans, and we we really have a lot to lose. It’s time to pay attention.”

Article from The Barnstable Patriot