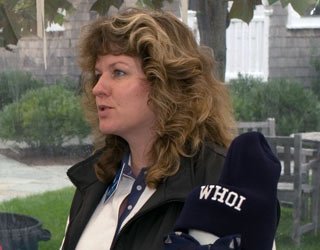 “Exploring Our Ocean Planet” is the title of BARS’ March meeting presentation by Kathleen Patterson.

Kathleen Patterson is an experienced presenter who has been a part of the communications team at Woods Hole Oceanographic Institution (WHOI) for more than twenty five years. Joining the Institution in 1989 as part of the Media Relations office, she was promoted to manager of the Ocean Science Exhibit Center in 2004. In this role, Kathleen works with scientists, engineers, graphic artists, and others to construct new exhibits that creatively explain the newest developments in ocean science. The exhibits are seen by approximately 25 thousand visitors each year. As well as being a frequent speaker herself, Kathleen has also developed a highly successful summer lecture series that features WHOI researchers and their globe-spanning projects. In addition to overseeing the operation of the WHOI Ocean Science Exhibit Center, Kathleen is the Institution’s liaison with museums around the world, helping them to develop exhibits that incorporate important discoveries made by WHOI investigators.