Shellshocked: Saving Oysters to Save Ourselves, a film presented by the American Chapter of the World Oyster Society, will be shown at our November 6th Meeting at the West Barnstable Community Building. This short documentary will open your eyes to this bio-engineering super star, critical to ocean health and life on earth. Following the film Kahren Dowcett will be speaking and answering questions. There will also be oysters to taste with special sauces and social activities after the film. Master shuckers Bob Parsons and Jack Walker will be doing the honors. 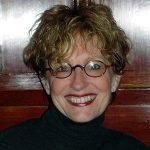 Kahren Dowcett has initiated collaborative ventures for individual, social, and environmental betterment. She has brought leaders, businesses, and organizations together to create consciousness-raising outcomes often using the arts as a catalyst for change. She has received awards for both her programming leadership from the Governor of Illinois, and her work as a playwright from the University of Massachusetts.

Most recently, Ms. Dowcett convened the 6th International Oyster Symposium of the World Oyster Society, based in Japan, to increase U.S. and local awareness about the benefits of oysters and their reef systems.As the springboard of the four-year campaign, Ms. Dowcett authored a stage comedy featuring an oyster as its main character. With humor, this scientifically based story for young and old alike, helps audience members value this remarkable keystone species. She currently is the North and South American Chapter Director of the Society and is working on publishing a book expected to be released next year in time for the next WOS symposium to be held in China.

“Oysters are the bees of the seas”